A Landscape of Pure Scarcity

A LANDSCAPE OF PURE SCARCITY

It was the colour of the ground he remembered most. Black. Spewed out from deep down below, it had flowed, and then frozen, into a delta of deep dark discomfort. Elsewhere they had thrown themselves into the cushions of moss that had formed in the crevices of this hard ground, but here the surface could cut eyes with its sharpness.

Closer to the houses the rock had been crushed into a stony mulch. Between the houses the government had laid a strip of black road, unnatural in its smoothness and bereft of any markings.

'It was the bankers,' said the woman, 'their eyes were bigger than their heads.' Her normally active face creased up at the thought of such stupidity. 'Idiots.'

'What happened?' he asked.

'They grew beyond their means, and accumulated a toppling mountain of foreign debt, but the money flowing through the system made so much noise it drowned out their senses. Idiots.'

'And then,' she looked at him despairingly, 'and then, this.' And she spun round, hand outstretched, silently remonstrating with the scene before them.

It was like a freeze frame from an instructional video How to Build a House. First you do this and at the end you have this. Houses were scattered seemingly randomly across the black ground, all in various states of completion. A concrete frame with expectant reinforced bars perched next to a fully complete house, curtains drawn against the nightmarish vision beyond. In other parts of the country he had seen houses hunkered down into the folds of the landscape, working with what was given, but here the buildings just sat on top, at the same time fragile and disdainful.

However, this was much worse than a frozen video scene, because there were signs of life in the midst of the building site. In the middle were half-completed houses where the owners had filled the concrete frame with haphazard windows and doors bought from the DIY store, and strapped them together with plastic tape and stretched polythene that flapped in the wind. Behind that they had strung up blankets as curtains, just as he had seen in squats in London. And all around lay the detritus of construction. Piles of insulation blown apart by the weather, cranes lying on their sides like dead animals, rusting dumper trucks settling down on deflated tyres, concrete mixers cradling their lumpy loads, clutches of wires disgorging from the ground. In other parts of the world these abandoned parts would have been scavenged, but here the collapse was so complete that they had no further purpose to serve. There was nothing more to build, not just because there was no money to build with, but also because there was nothing to build for; it appeared that the country had already gone far past its limits.

The owners were left stranded at the precise point that the construction programme had progressed to; trapped by the burden of cheap money, which was now worth nothing, all they had were these partial fragments of the dreams the bankers had sold them. He did not know whom to feel more sorry for. The people in the completed houses who had invested most and so lost most, and were now perpetually reminded of the folly of the moment, hence the drawn curtains behind which they could live out a semblance of a refined life. Or those in the half-finished buildings; those people existed in a state of suspension, on the one hand living out the pioneering vision of the wild west, on the other hand restricted in their means to reach completion. Or should he feel most sorry for those who owned the useless empty frames, which held out no hope of ever being completed? 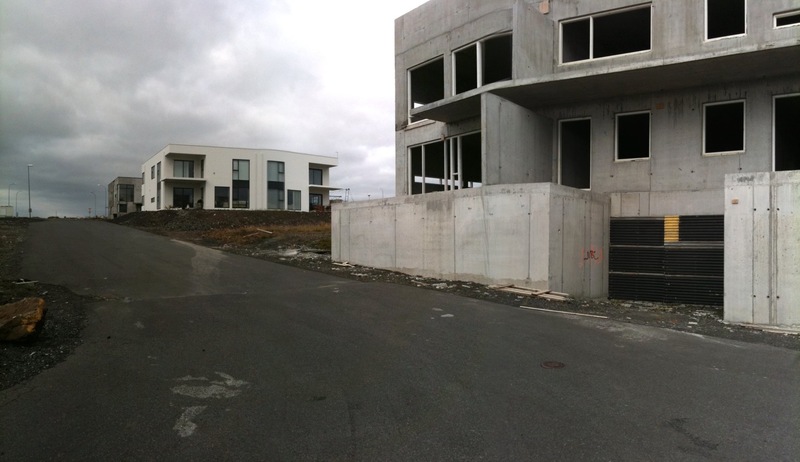 In reality, he should have placed his concern everywhere in equal measure. All of them had a share of abundance and a share of scarcity. All had something to show but lacked something else. The owners of the completed houses at least had windows and warmth, but lacked the perfect wholeness they had been promised. The half-finished had a sense they might get there through their own ingenuity, a certain control over where they were going, even though they lacked the immediate means to get there. And the ones who had barely started at least had the comfort that they had not invested too much, even though they lacked anything to show for their dream of a better life. Scarcity and abundance flipped around, relative to what was measuring them and who experienced them.

'This is a landscape of pure scarcity,' he blurted out, pleased with the phrase, thinking it might work as a chapter heading.

'There's no such thing as pure scarcity,' she replied quickly, words tumbling together, 'it's always on the move, always constructed, always affecting someone.'

As if on cue, a young woman appeared around the corner, struggling with a pushchair as it bounced around on the crushed rock where a pavement should have been. In his eyes it was strange that she avoided the smooth road, but she was conditioned to protect her child from the merest hint of traffic. Eventually she reached a bus stop, a pole stuck in the black ground with a mess of concrete spilling around the edges.

'Surely there can't be buses here!' he said.

'Oh yes there are, the municipality promised to provide infrastructure, including a regular bus service, and are now fearful of breaking that agreement. Idiots.'

Sure enough a bus came, empty but on time, and the young woman leant down to lift up her heavy load, wishing for a pavement to be installed to bring her up to the level of the bus, wishing for more marks of civilisation to cover the harshness of the underlying scene.

'One day nature will come and take this back,' the first woman said, 'but nature works on a different clock here.'

It would be a long time, beyond their lives, before they could throw themselves into the moss again.

'In the meantime, there is work to do.'

To unpick the constructions of scarcity. To find new forms of abundance.